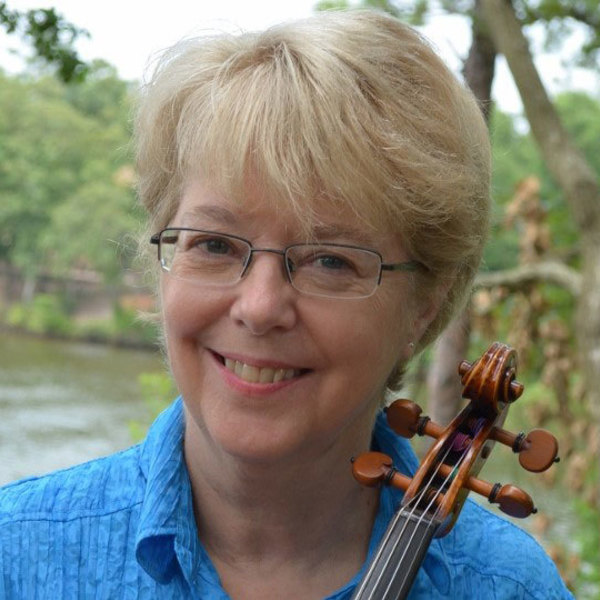 As violinist of the Notre Dame String Trio, she toured extensively with notable concerts at the Detroit Institute of Arts, the Fontana Chamber Series, the Mostly Music Series in Chicago, and a debut concert in Carnegie/Weill Recital Hall, New York. The ensemble recorded several highly acclaimed CDs on the Centaur label featuring repertoire of Paul Hindemith, David Diamond, and in 1994 the trio gave the world premiere of a string trio composed by Ethan Haimo.

Ms. Plummer’s career began in 1974 when she joined the Houston Symphony and was appointed Assistant Concertmaster in 1977, a titled position she held until 1986. She was a frequent soloist with the orchestra as well as a recitalist and chamber musician in Houston. Ms. Plummer also served as Concertmaster of the Grand Teton Music Festival and the Aspen Contemporary Ensemble.

She holds a Bachelor of Music from Indiana University and a Master of Music with Honors in Violin Performance from the New England Conservatory where she studied with Joseph Silverstein and Charles Treger. As a young violinist, her string quartet won second prize in the esteemed Coleman Chamber Music Association in Pasadena, CA, and she was awarded seven consecutive Fellowships in the Aspen Music Festival.

Since her retirement, Ms. Plummer lives in Northern Virginia enjoying a full life with family and music.  She has given guest performances for the Friday Morning Music Club in Washington D.C., and in 2018 was an adjudicator for the Washington International Competition for Strings.

American Record Guide June/July 2000, p.111 “Passionate expansive, vital music…played with confidence and flair by pianist Ralph Votapek and the Notre Dame String Trio…This recording is as full of spit and vinegar as the playing…Bravo to all concerned!”

Fanfare September/October 2000 “I can’t say enough about the high level of these performances.  The rhythmic acuity and dead-on intonation of each of the string players are nothing short of brilliant.”

Fanfare July/August 2000 “these are thrilling and deeply satisfying performances - captured in crystal-clear sound.that leave no margin for error or improvement. An essential contribution to the American chamber-music-discography."