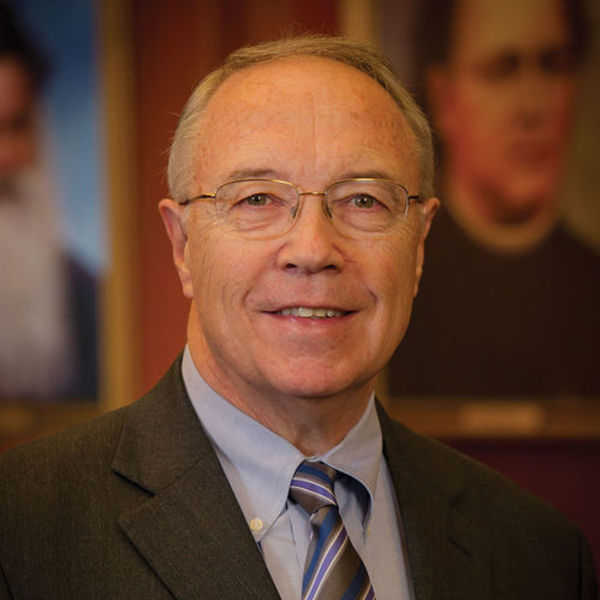 Gerard Baumbach, founding director of the Echo Graduate Service Program of the McGrath Institute for Church Life, joined the faculty in 2003 after a distinguished career in publishing, writing, and parish catechetical leadership. He was responsible for establishing strong Echo partnerships between dioceses of the United States and the Institute. He was a concurrent professor in the Department of Theology, where he taught periodically the history and theory of catechesis and served on the M.Div. and M.A. in Theology committees. Research interests include catechetical history, theory, and leadership formation. At NYU he specialized in religious education.

He was part of the preparation process for numerous catechetical publications during nearly 25 years at William H. Sadlier, Inc., where his last position was executive vice president and publisher. He also served on two task groups of the U.S. Bishops’ Conference. He was selected for the “Christian Educators of the 20th Century” database, recognizing his contributions to Christian religious education.

In 2018 his book The Way of Catechesis received a first place award from the Association of Catholic Publishers (resources for ministry category) and a second place award from the Catholic Press Association (pastoral ministry category). He received (with the Institute’s Center for Catechetical Initiatives) the 2008 NCCL (National Conference for Catechetical Leadership) Catechetical Award, which recognized Echo. In 2003 he received the F. Sadlier Dinger Award for leadership of and service to catechesis. Prior works include Experiencing Mystagogy (1996), Spirituality for Lent and Easter (1998), and Letters from a Wounded Heart (2000).