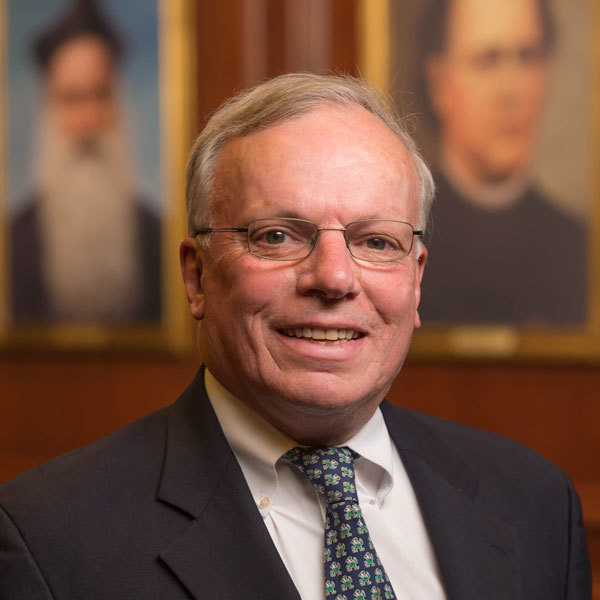 Dr. Mogavero joined the Department of Economics in 2009 as Director of Undergraduate Studies for the Department of Economics, a position which he held until his retirement in 2015. At ND he loved to teach first year students. In addition to the many highlights he enjoyed with his hundreds of students, one of his favorite moments was having the opportunity to to hood both of his children, Lauren and Michael, at the 2014 Notre Dame University Law School graduation.

Prior to joining Notre Dame, he served as Vice president for University Planning and Continuous Improvement at Edinboro University between 1995 and 2009. During this time, he distinguished himself as a leader in developing university planning and continuous improvement systems. He oversaw two successful reaccreditation efforts. He consulted with many other universities in their efforts to develop effective planning systems.

He began his time as an administrator as Dean of the College of Business at Dowling College in 1990. While at Dowling, he oversaw the development of four new master’s degree programs and one undergraduate major.  Enrollment in graduate business programs grew from 250 to over 700 students.

He served as Professor of Economics and Management Sciences at Alfred University from 1980 until 1990. At Alfred, he was the recipient of the University’s highest teaching honor on four different occasions. During that time, he was elected an Allegany County (New York State) Legislator and was active in the successful attraction of two divisions of Fortune 500 firms and the subsequent creation of over 425 new jobs.

Between 1975 and 1980 he was an Assistant/Associate Professor of Economics at Niagara University. He was responsible for graduate school advising and coordinator of Principles of Economics courses.

He earned his B.A. from Canisius College and his M.A. and Ph.D. from the University of Connecticut.

Dr. Mogavero considers his teaching of undergraduate students to be the most affirming experience of his career. Seeing his students grow—and continue to grow as they pursue their careers and their lives beyond Notre Dame—was always deeply rewarding. He is grateful to Notre Dame for his time at the university, and will forever consider himself a member of the Notre Dame family.