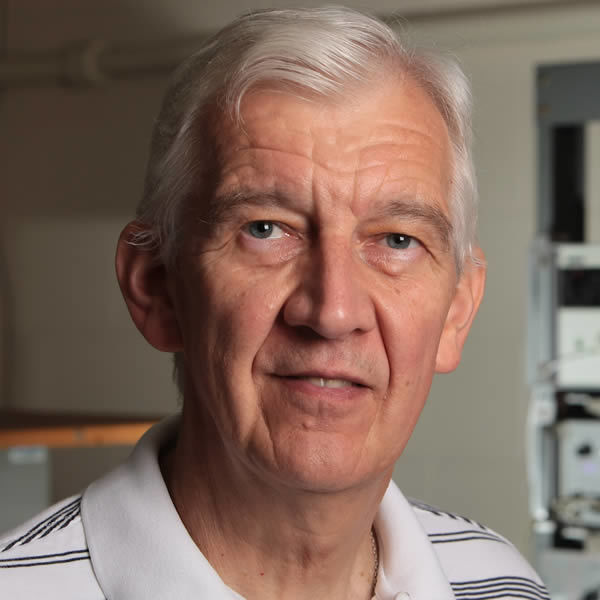 Professor Nowak received a B.S. in chemistry from Case Institute of Technology in 1964. He earned his Ph.D. in biochemistry from the University of Kansas in 1969. He spent two years as a postdoctoral fellow and a year as a research associate at the Institute for Cancer Research. He joined the Department of Chemistry at Notre Dame in 1972. He received a National Institutes of Health Research Career Development Award. He was a visiting professor at the University of Groningen, the Netherlands, and a visiting professor at the Pontifical Catholic University of Chile, Santiago.

Professor Nowak's group is investigating enzyme mechanisms, their regulation and structure and how they are interrelated. These enzymes require cations for activity and their roles in the regulatory and catalytic processes are being studied. The enzymes currently investigated are involved in metabolic energy utilization and energy storage.

Enolase and pyruvate kinase (PK) are involved in glycolysis, the degradation of glucose to generate ATP and lactate anaerobically. Phosphoenolpyruvate carboxykinase (PEPCK) catalyzes the committed step in glucogenesis whereby 3- and 4-carbon metabolites are converted to glucose. Current work involves kinetic and thermodynamic measurements, protein modification and subsequent protein chemistry, NMR, EPR and fluorescence spectroscopy, molecular biology and site-directed mutagenesis. Results of chemical modification have suggested several amino acids that serve in enzyme regulation and catalysis and have generated targets for site-directed mutagenesis. Models of genetic disorders are being developed.

Pyruvate kinase (PK) from yeast is a key regulatory enzyme. Kinetic investigations indicate synergistic ligand interactions occur with PK. The key interactions are between the divalent cation and the substrate phosphoenolpyruvate (PEP) and the cation and the regulator fructose-1,6-diphosphate (FDP). The coupling between PEP and FDP are minor. These synergistic effects were also studied by direct binding. These ligand coupling effects are quantitated in thermodynamic terms. The role of the cation is the key to regulation. Spectroscopic measurements indicate the two forms of the enzyme, with and without FDP, have the same catalytic constant but two different conformational forms. A new model to explain the mechanism of the regulatory process was developed. This includes an explanation for allosterism based not only on cooperativity in ligand binding but also on a later step in the kinetic process. An expression system for this enzyme is used to develop models for specific genetic diseases.

Previous NMR studied with PEPCK indicate substrates bind in the second coordination sphere of the bound Mn2+ where catalysis occurs. This is confirmed by the synthesis of an active PEPCK-Co3+ complex. This modified enzyme has allowed the location of the cation binding site. Additional amino acid residues are identified. An expression system for PEPCK allows the design of specific mutants. The location of and role for the second cation is being analyzed.

Enolase has been shown to have two divalent cations binding per subunit with a weaker site being inhibitory. Site II was selectively labeled with Co3+ to give active enzyme. This suggests that the metal serves no active function. NMR studies of the substrates bound to the enzyme give pKa values of the bound substrates during catalysis.