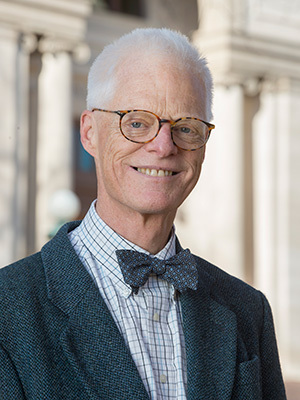 Thomas Gordon Smith, professor emeritus and former chair in the School of Architecture at the University of Notre Dame, died Tuesday (June 22). He was 73.

After earning bachelor’s and master’s degrees from the University of California at Berkeley, Smith established his own architectural practice and taught at the College of Marin, UCLA, Yale University and the University of Illinois at Chicago before coming to Notre Dame in 1989 as a professor and chair.

As a Rome Prize Fellow in Architecture at the American Academy in Rome in 1979-80, Smith became committed to the profession of classical architecture and brought that tradition to Notre Dame. Under his direction, the classical curricula at the University quickly became regarded as the leader in higher education and at the forefront of a resurgence in classicism in American architecture, prompting The New York Times in 1995 to describe Notre Dame as “the Athens of the new movement.”

“Thomas Gordon Smith brought a new vision to the architecture program at Notre Dame, and brought me and many of my colleagues to the University,” Michael Lykoudis, professor and former dean, said. “We all owe much to Thomas; he was a valued colleague and a friend. He was instrumental in rebuilding a culture of classical and traditional architecture that went beyond style, to the heart of what it means to be an architect in contemporary society.”

Stefanos Polyzoides, the current Francis and Kathleen Rooney Dean of the school, added: “Thomas had a tremendous impact on the trajectory of the architecture program at Notre Dame. His commitment to classical architecture has inspired generations of students and his foresight in creating this program has had a transformative impact on the field. I greatly admired Thomas and respected him as both a practitioner and an educator."

Always bow-tied and bespectacled, Smith designed dozens of ecclesiastical, public and residential projects across the country. He also developed designs for on-campus buildings, including the renovation of Bond Hall, the past home to Notre Dame’s School of Architecture, the Alliance for Catholic Education’s Carole Sandner Hall and the master plan and the Our Lady of Sorrows Mausolea for Notre Dame’s Cedar Grove Cemetery.

Smith’s publications include “Classical Architecture: Rule and Invention” and “Vitruvius on Architecture,” his edition of the five books of the 1st century Roman architect Vitruvius. He was the subject of a 2001 book by Richard John titled “Thomas Gordon Smith: The Rebirth of Classical Architecture,” in which the University of Miami professor highlights Smith’s central role in the revival of classicism in contemporary American architecture, as well as his influence as an educator, commentator on Vitruvius, historian of the Greek revival, painter of frescoes and designer and collector of furniture.

Smith is survived by his wife of 50 years, Marika, a sister and brother, six children and 10 grandchildren.

Originally published by Dennis Brown at news.nd.edu on June 24, 2021.