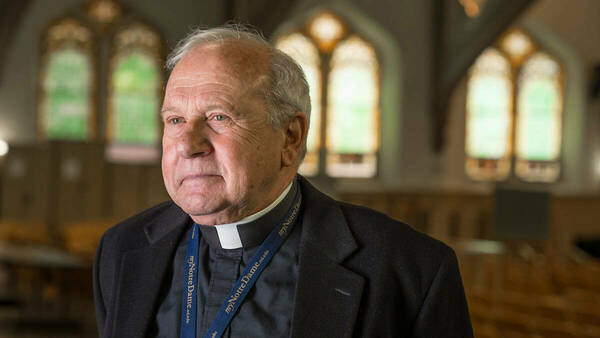 Father Link had both — in abundance.

A prosecutor, professor and priest, Father Link died Thursday (Oct. 28). He was 85.

“Dave lived a remarkable life,” Notre Dame President Rev. John I. Jenkins, C.S.C., said. “He was a legal scholar, visionary leader and humble servant of God. Notre Dame, the law school and our broader community are all far better because of him. God rest his soul.”

Rev. Edward A. Malloy, C.S.C., president emeritus of Notre Dame, added: “Dave Link was a multitalented academic and leader. He served with distinction as dean of the Notre Dame Law School, inspirer of the University of St. Thomas School of Law, first vice chancellor of the University of Notre Dame Australia, devoted husband and father, Catholic priest and advocate for and friend of prisoners in the state of Indiana. Most of all, he put Christian values and virtue into practice. He will be deeply missed.”

For the first five years of his legal career he served in the U.S. Department of the Treasury, then practiced law for four years with the Chicago firm Winston & Strawn.

Father Link returned to his alma mater in 1970 to teach law, and five years later Notre Dame President Rev. Theodore M. Hesburgh, C.S.C., appointed him the Joseph A. Matson Dean of the law school, a position he held for the next 24 years, then the longest tenure among American law school deans.

Under his direction, Notre Dame Law School became noted for what Father Link described as “an orientation toward the value questions involved in the law. The moral and ethical questions are raised here with the same intensity that the substantive and procedural issues are discussed.” It was Father Link who coined the phrase “A Different Kind of Lawyer” to describe the training students receive at Notre Dame.

Always highly regarded for their teaching, law school faculty during Father Link’s deanship began to publish at a far greater rate. He also oversaw two major building expansions, an enlargement of library collections, the establishment of new research centers and scholarly publications and increases in faculty and students.

Father Link spoke and wrote extensively on the topic of professional responsibility for attorneys and taught legal ethics. He participated in a number of committees designed to encourage a renewed sense of professionalism among attorneys, including the American Bar Association Section on Legal Education, the Committee on Professionalism, the Indiana State Ethics Commission and the Society for Values in Higher Education. He was also a noted author in the field of federal taxation.

Father Link also focused on international law and human rights. He was interim director of the law school’s Center for Civil and Human Rights and chaired the World Law Institute, a not-for-profit organization established to sponsor educational programs in fields of law relating to the global economy, world organizations and the emerging world common law.

He took leave from Notre Dame from 1990 to 1992 to serve as the founding president and vice chancellor of the University of Notre Dame Australia and continued on its board of trustees and board of governors. He also served on leave from Notre Dame as associate vice president and founding dean of the University of St. Thomas School of Law and as deputy vice chancellor and provost of St. Augustine College of South Africa.

In December 1988, a fire at the Morningside Hotel, a downtown facility that housed low-income residents of South Bend, killed one person and destroyed the historic building. The tragedy galvanized Father Link, Father Malloy and others in the community to look for a way to care for the less fortunate. The result was the creation of the city’s nationally recognized Center for the Homeless. Father Link also devoted his time and talent to Habitat for Humanity, Christmas in April, There are Children Here, the Indiana Catholic Conference and many other organizations.

When Father Link’s wife of 45 years, Barbara, passed away in 2003, he left his vocation and began to live his purpose. Barbara, Father Hesburgh and others had suggested that he should become a priest after retiring from academe. After Barbara’s death, he entered seminary and was ordained in 2008 in the Diocese of Gary, Indiana. He had ministered to Indiana prison inmates before becoming a priest, and that was his primary responsibility — purpose — in his final years.

“I don’t want to be sappy about it, but they’re all children of God,” he said in an interview with Criterion, a publication of the Archdiocese of Indianapolis. “They’re not all bad people. Many of them are good people who made some horrible decisions in life. But as I read Scripture, they’re all subject to redemption. And my job is to tell them what redemption is all about. My relationship is one of friendship. I tell them to keep their heads up and God will come to their assistance.

“This part of my life as a priest is to serve the least, the last, the lost and the lonely. I’m a servant.”

Originally published by Dennis Brown at news.nd.edu on October 29, 2021.