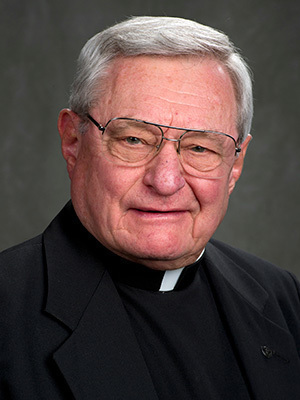 Rev. Gregory A. Green, C.S.C., a Holy Cross priest who served the University of Notre Dame and the Congregation of Holy Cross in multiple roles for more than a half-century, died Tuesday (Dec. 15) at Holy Cross House, across St. Joseph’s Lake from his beloved alma mater. He was 85.

“Father Greg served Notre Dame in many different and meaningful ways over many years,” Rev. Robert Dowd, C.S.C., religious superior of Holy Cross priests and brothers at Notre Dame, said. “Whether he was working with students, faculty or staff, he provided a listening ear and a calming presence. His concern for others and willingness to be there for them in times of need will always inspire us. We thank God for his life and ministry.”

Born and raised in Chicago, Father Green knew even while in elementary school that he wanted to be a priest. He was received into the Congregation of Holy Cross, Notre Dame’s founding religious community, in August 1953, made his first profession of vows a year later and made his final profession on Aug. 16, 1957.

He graduated from Notre Dame in 1958, and then attended Holy Cross College in Washington, D.C., where he earned a master’s degree in theology. He was ordained a Holy Cross priest at Notre Dame’s Basilica of the Sacred Heart on June 6, 1962.

After ordination, Father Green assisted at a parish in Detroit, and then returned to Notre Dame to serve as chaplain and assistant rector of Breen-Phillips Hall. The following summer, he was sent to Texas to assist in a parish, and then received his first long-term parish assignment in 1963 at St. Bernard’s Parish in Watertown, Wisconsin, where he served for four years.

In 1967, Father Green returned to South Bend to assist at St. Joseph’s Parish, serving until 1972, when he was asked to help in the formation of novices at the Holy Cross novitiate, which was then located in Bennington, Vermont. He served for a year at Holy Cross Parish in South Bend before returning Notre Dame.

At his alma mater, Father Green’s many and varied roles included rector of Sorin Hall, associate vice president of student affairs from 1977 to 1984, and priest in residence at Sorin, Siegfried and Welsh Family halls. He was most widely known to the broad campus community as the longtime staff chaplain, ministering to the spiritual needs of Notre Dame employees from 1988 to 2013.

For the 50th anniversary of his ordination, Father Green wrote of his work as staff chaplain: “I am not their pastor, but I am with them in any need — happy occasions (picnics, award banquets, Christmas gatherings, recognition dinners) and at times of pain and grief (hospitalizations, wakes and funerals — not only of employees and retirees, but also of spouses, children, parents, grandparents and in-laws). It is a very rewarding ministry. All of these events are significant moments and I’m privileged to be with them.”

Preceding him in death are his parents, Albert and Helen Green, and sister, Margaret Froehlke. He is survived by his brother-in-law, Dr. Donald Froehlke, as well as a niece and four nephews.

A funeral Mass will be held at 3:30 p.m. Monday (Dec. 21) at the Basilica of the Sacred Heart and online. Burial will be in the community cemetery at Notre Dame.

Memorial contributions in support of the mission and ministries of the Congregation of Holy Cross can be made to: United States Province of Priests and Brothers, Office of Development, P.O. Box 765, Notre Dame, IN 46556-0765, or online.

Link to Obituary in The South Bend Tribune

Originally published by Notre Dame News at news.nd.edu on December 16, 2020.