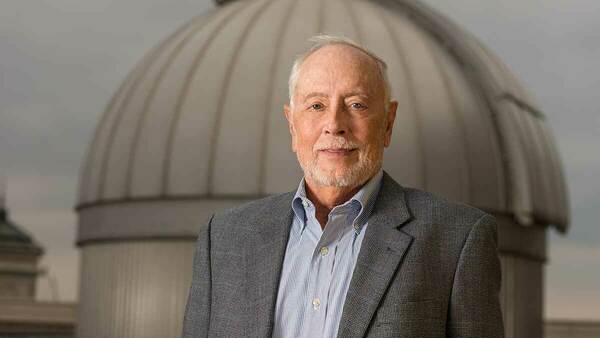 Terrence Rettig, retired professor of astrophysics in the Department of Physics at the University of Notre Dame, died Sunday (Aug. 22). He was 74.

Rettig earned his doctoral degree in astrophysics from Indiana University and joined the Notre Dame physics faculty in 1983. He worked his way up the academic ranks and was promoted to full professor in 2001.

In addition to teaching, Rettig served as a program director with the National Science Foundation and helped to establish the NSF Research Experiences for Undergraduates (REU) Program at Notre Dame — the longest-running REU program for physics in the country.

“I view him as the founder of astronomy at Notre Dame,” said Peter Garnavich, professor of physics and chair of the Department of Physics. “Terry started as a teaching professor and his work was so impressive he was put on the tenure track. That shows how excellent he was at both teaching and research.”

Rettig played an active role in multiple initiatives that would go on to advance the study of astronomy for the University — including operations at both the Sarah L. Krizmanich Telescope at the Jordan Hall of Science Observatory and the Napoleon Telescope atop Nieuwland Science Hall — and he was a leader in planning the Digital Visualization Theater as part of the construction of Jordan Hall.

“He was huge in getting both observatories up and running, creating and publishing projects and observations that students could follow and conduct on their own. Those observing projects he created are still used by our students taking the intro astronomy classes,” Garnavich said.

Rettig was “best appreciated for his calm and jovial demeanor in all discussions,” said Grant Mathews, professor of physics, who worked with Rettig to develop those introductory astronomy courses and observational projects. “He was a very good friend and colleague.”

Rettig was instrumental in coordinating Notre Dame’s partnership with the Large Binocular Telescope Observatory. While conducting research at the Vatican telescope on Mount Graham in the Pinaleno Mountains of southeast Arizona in 1996, he learned of plans to build the state-of-the-art telescope — which would become one of the world’s most powerful telescopes — and proposed that Notre Dame invest in the $120 million project, significantly developing the University’s astrophysics program.

His research primarily focused on understanding the collapse of proto-planetary disks and the conditions and constraints under which planets form. His use of high-resolution infrared observation provided the first direct observations of how gas and dust stratify around young stars. The infrared spectroscopy program, which began as an exploration of comets, has been ongoing for more than 20 years.

Rettig’s work to understand comets and planet formation gained unique recognition in 2000 when the International Astronomical Union named an asteroid after Rettig. The suggestion for the naming came from Ted Bowell, who discovered the 5-mile-wide asteroid between Mars and Jupiter in 1985. Bowell suggested the asteroid be named in honor of Rettig for his contributions to the field.

Rettig is survived by his wife, Shari, and three stepchildren, five grandchildren, three sisters, two brothers, his stepmother, an aunt and uncle, and several nieces and nephews.

A memorial service will be held at noon Sunday (Aug. 29) at Palmer Funeral Home—Hickey Chapel, 17131 Cleveland Road, South Bend, Indiana. Friends may visit with the family from 11 a.m. to noon Sunday at the funeral home, prior to the service.

Online condolences may be left for the family at www.palmerfuneralhomes.com.

Originally published by Jessica Sieff at news.nd.edu on August 24, 2021.