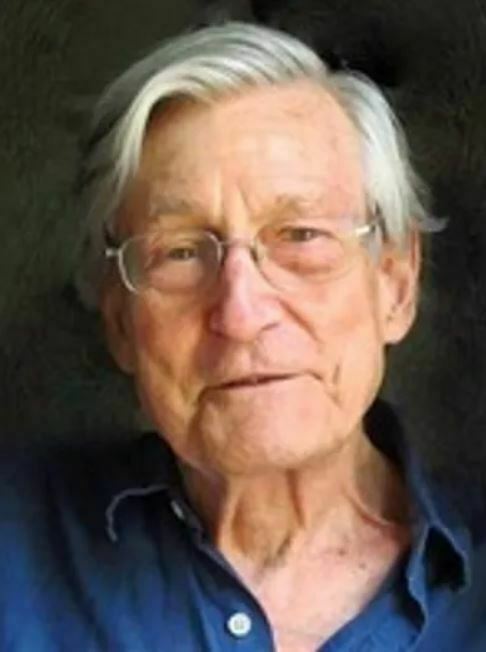 Douglas Kinsey, an artist and professor emeritus in the Department of Art, Art History, and Design at the University of Notre Dame, died May 21 at his home. He was 88.

At Notre Dame, Kinsey was honored with the Sheedy Excellence in Teaching Award, the highest teaching honor in the College of Arts and Letters. It recognizes a faculty member who has sustained excellence in research and instruction over a wide range of courses and who motivates and enriches students using innovative and creative teaching methods.

“He was truly dedicated to his students,” said ceramics professor Bill Kremer, a longtime friend and mentee of Kinsey’s. “When he would do his grading, he would type out a letter to each student explaining the grade and his understanding of the work. He had a large student following and they would come to visit him for years after graduation.”

Although he moved to emeritus status in 1999, Kinsey was still a frequent presence in the department for many years, participating in the end-of-semester critiques and engaging with students, alumni and departmental colleagues, many of whom considered him a mentor.

Kinsey’s studio and his home on Notre Dame Avenue were always open to students for counsel on art or on life. He was equally generous to his fellow faculty members, Kremer recalls.

“I remember meeting him in the studio when I first came to Notre Dame in 1973,” Kremer said. “I was 14 years younger. He just sort of took me under his wing and from then on he was a mentor for me. I called him Uncle Doug.”

When Kremer wanted to buy a house in a rural area so he could set up a ceramics studio with kilns, the Kinseys even loaned him the money for a down payment, he recalled. The two friends often bonded about art, teaching and life, visiting each other's homes and studios and working together in their shared garden.

“Doug was a wonderful man — a very gentle person but incredibly idealistic,” Kremer said. “He had very high standards for himself and for the world.”

Kinsey’s approach to life and art reflected his deep commitment to social justice and his lifelong involvement with the Religious Society of Friends. Many of his paintings were inspired by news photographs — often from The New York Times — that spoke to his concern for those in crisis, dispossessed by war or natural disaster.

“Hopefully this will suggest to the viewer that in spite of the fact that catastrophe happens, the spirit and quality of human community perseveres,” Kinsey said when describing his work during his 1999 Sheedy Award acceptance speech.

Kinsey had more than 70 one-man shows to his credit across the country as well as internationally, and his work has been shown frequently at the Snite Museum at Notre Dame and at the South Bend Museum of Art.

In addition to his solo artwork, Kinsey enjoyed collaborating with friends and fellow artists, providing illustrations for books of poetry, or working with Kremer on a series of painted ceramic platters.

Kinsey is survived by his spouse, Marjorie Schreiber Kinsey, and his sister, Dea Kinsey Andrews.

A Memorial Meeting after the custom of Friends will be held for Kinsey at 2 p.m. June 11 at the South Bend Friends Meeting, 333 W. Colfax Ave. in South Bend.

To honor his memory, donations may be made to the American Friends Service Committee, the U.N. High Commission for Refugees or the World Food Program of the U.N. Palmer Funeral Homes-River Park Chapel is assisting the family with arrangements. Online condolences may be expressed to the family at palmerfuneralhomes.com.

Originally published by Kate Garry at al.nd.edu on June 1.